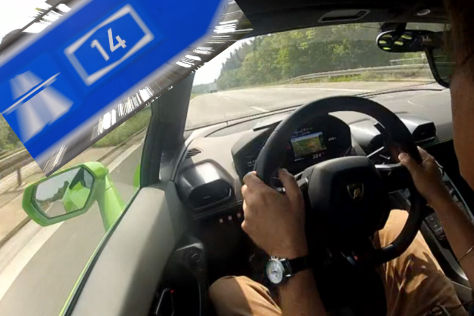 The Do’s and Don’ts of German Autobahns

Germany is the favorite destination of tourists who want to drive their cars really, really fast. Here are some of the most important rules for driving on the Autobahn.

Zur Videoseite
They come from neighboring countries, from the US or even China: tourists who visit to Germany to enjoy the thrill of high-speed driving without those pesky speed limits "impeding" driving fun almost anywhere else. In other European countries, for example, such fun is limited to between 100 and 140 km/h (approx. 62 to 87 mph); on most of Germany's Autobahns, it's only your very own speed demon that has the final say (see photo gallery). Sure, there are other countries that have no speed limits, such as Afghanistan, Bhutan, Burundi, Haiti, Lebanon, Mauritania, Myanmar, North Korea and Somalia. But in most cases, the bigger adventure than higher highway speeds would be just getting there. Germany might dampen the spirit a bit when it introduces the "Maut", its newly announced universal road toll, in 2016. But seriously, no Chinese tourist coming all the way to Germany will be deterred from tearing down the Autobahn by having to pay ten Euros for a 10-day road-tax sticker.

zur Galerie
So, off to Germany you go to slip into the sports car of your choice, eh? Well, not so fast. First, you need to make some preparations, such as the timely reservation of the appropriate rental car, for example. Of course, Germany's car rental companies offer the necessary "tools" for the job: Sixt, Hertz, Avis and most others will rent you a Jaguar F-Type, BMW M5, VW Golf GTI or Porsche 911 Carrera ... although the contract might feature considerable fine print. The minimum age for drivers is 27 years, and you need to show two credit cards. You can't be a novice driver either – you need to have had your license for at least three years.

Even (usually mild-mannered) Hollywood star Tom Hanks was enthralled by Germany's seemingly limitless Autobahn speeds. He told Late Show host David Letterman that during the making of "Cloud Atlas" he had been chauffeured around in a Volkswagen T5, which made the 120 mile-trip from Dresden to Berlin in "what felt like 17 minutes and at 125 miles per hour". Hanks was impressed: "The government is off your back", he said. "You can just hit the gas, baby!" Small wonder, then, that speed freaks from around the world are lured to Germany to let it rip over 8000 miles of splendid Autobahn. According to the "Bundesanstalt fuer Strassenwesen", Germany's administrative division responsible for most things traffic-related, around 65 Autobahn sections have no speed limits whatsoever. Nevertheless, around 1800 autobahn miles are usually traffic-restricted construction sites with speeds limited to 50 or even 37 mph. Should you ignore those limits, you might be considered a safety risk – and you will face severe penalties.

zur Galerie
Driving without speed limits does not translate into being entitled to carefree road racing, anyway. There is such a thing as "recommended speed", a self-imposed – and self-regulated – limit of 80 mph. Driving any faster carries an increased responsibility, which means that if you are involved in an accident while driving above those 80 mph you will bear partial liability, at least, even if you were obeying all traffic rules otherwise.
Here are the most important rules for driving on the Autobahn:
1. Tailgating is "verboten". Flashing your headlights to make that crawling car in front of you give way is considered coercion and an offense punishable by stiff fines and – possibly – jail terms of up to 3 years. You also might lose your license.
2. Never pass on the right. Also: if you pull into the left lane to pass a slower car on the Autobahn, you have to expect much faster cars to be coming up behind you, much faster.
3. Never stop on the emergency lanes. Unless, of course, it's an emergency, for instance if your car broke down or if someone in the car is getting ill. An empty tank could also be considered an emergency. Always remember: When getting out of the car on the emergency lanes, you have to wear the reflective vest (usually supplied in the trunk of the car); have your passengers stand on the safe side of the guard rails; secure your car by turning on hazard-signals, setting up a warning triangle and immediately call for help. Never stop on the emergency lane to make a phone call!
4. Making a U-turn on the Autobahn may cost you your life and is therefore prohibited under all circumstances. You become a so-called "ghost driver" should you make a U-turn endangering yourself and hundreds of other drivers. Penalties are drastic.
5. Notorious driving in the middle lane of a three-lane Autobahn is a breach of the "Rechtsfahrgebot", the law requiring you to always use the utmost right lane when driving. The law is supposed to avoid making frustrated drivers pass slower cars on the right. Staying constantly in the left lane – the "passing lane" – is also a violation against the "Rechtsfahrgebot" on the Autobahn.
6. When leaving the Autobahn, you have to use your signal around 200 to 300 yards before the exit ramp as a rule of thumb. However, this rule is hardly ever enforced. When entering the Autobahn, you must yield to traffic. Should you force your way in you might face stiff penalties. It is better if you accelerate briefly on the emergency lane before pulling out into traffic.