The fastest car in the world 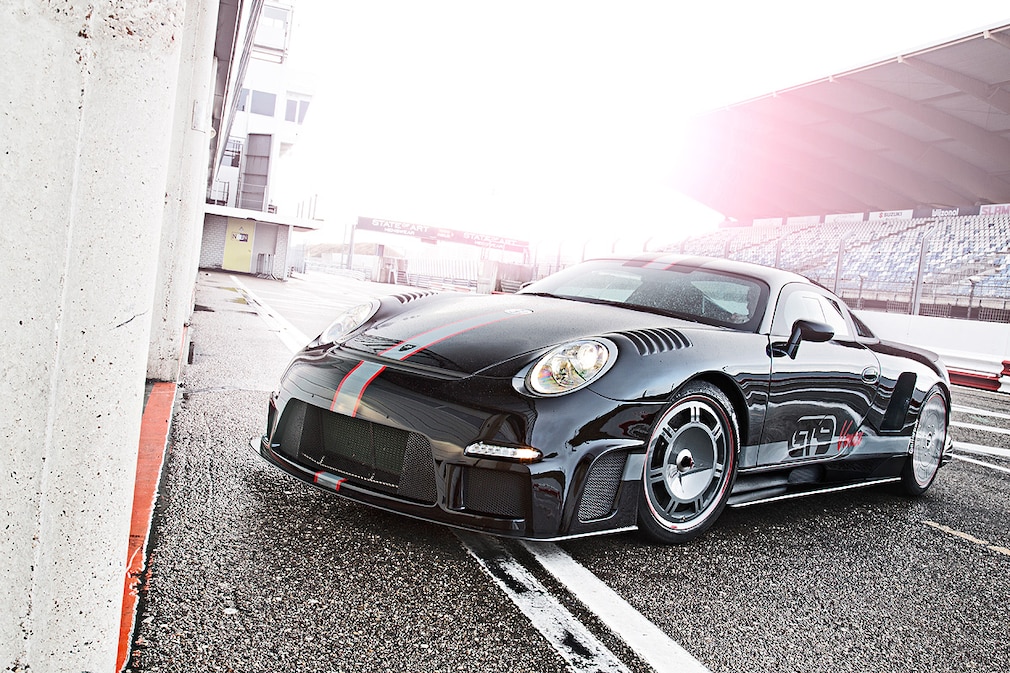 30.10.2014 —
Reaching for the limit: With its 1381 hp, the GT9 Vmax is theoretically able to reach 271.5 mph. That's insane! Our reporter Gerald Czajka tried it for himself in Zandvoort. An exclusive report!
Maurice is storming into the pit white as a sheet – which makes him just a tad paler than I am. Not surprising. Maurice is responsible for the proper running of race traffic in rainy Zandvoort. And the racket that seemed to have ripped a hole into the clouds while exploding my eardrums sounded more like the grandstands collapsing than an engine starting up. Jan Fatthauer, head of 9ff and the creator of the GT9 Vmax – now idling relatively peacefully – is wearing a wide grin. He knows his baby and the reactions it gets. He's turned the six-cylinder boxer from a 911 GT3 RSR into a 4.2-liter-hell-of-an-engine, outfitted with two turbos with up to two bar of pressure, 857 Pound-feet of torque and 1381 hp. That’s enough to rocket the car to a top speed of 271.5 mph – according to the brochures, at least. Maybe it was too much for the grandstands? Ain't gonna happen, not on this uncomfortable day in the Dutch North Sea beach town.

First, the Zandvoort track doesn't even allow 300 km/h, and secondly, it's raining pretty heavily and I am driving a car that has already been sold to a customer. An Arab sheikh who wishes to remain anonymous has plunked down 540.000 Euros for this superlative on wheels. And I don't wish to be a killjoy. Rule of the day, therefore: Stay calm, which is exactly what happens. A wise decision, because even at half-power this bullet of a car feels like a giant jackhammer pounding you around the track. At even the slightest movement of your right foot, the six forged pistons are pulling wildly at the titanium connecting rods while enormous g-forces drive my spine into the relentlessly gripping Recaro bucket seats. It's awesome how this horsepower monster pulls forward even on wet roads. And on dry surfaces, I'd bet that the 9ff logo would have imprinted itself between my shoulder blades permanently.9ff claims its 1.1-meter flat flounder will accelerate in 13.0 seconds. Not for the 0-62, however; the car will do that in 3.1 seconds. Not even for the 124 mph, which the über-911 does in 6.8 seconds. No, no, after 13 seconds, you're supposedly reaching the 186 mph mark. Not even the 1184 hp Bugatti Veyron Super Sport can do that; it needs 14.6 seconds. In top speed, too, the go-getters from Dortmund are claiming pole position which – with a name like Vmax you ought to offer the maximum – can only be interpreted as consistent. With its 271.5 mph top speed, the racer from Dortmund clearly distances even the Veyron, which reaches "only" 257 mph. Witchcraft? Not really. Next to the sheer power, the Vmax has two more aces up its sleeve.

Form follows function, so does the weight

First: weight. Although not really that small at 185 inches long, the Vmax only weighs 2948 lbs. That is made possible through the use of a trellis frame and one-piece carbon fiber body as well as the carbon fiber doors and Plexiglass windows (except the windshield). Second: ingenious aerodynamics. To fully understand the movement of air masses, I probably need an advanced degree in aerospace technology. I do know this much: air comes in through the front, then from the sides, goes through the radiator and out again on the sides just ahead of the front wheels, which creates negative pressure in the wheel well, i.e. downforce. The long spoiler-formed rear and the flat underbody with diffusor add to the adhesion.

Which explains why the GT9 sticks to asphalt like a politician to his post and allows amazing cornering capers. I'm even getting used to the unusual gear shift procedure. The engine's 1381 hp are delivered to the 335-section rear tires through a sequential six-speed transmission – but you still need to use the clutch when changing gears. A special order by the sheikh which at the end of the day almost seems normal to me. Stay calm remains my motto nevertheless as the brutal biturbo engine, with its chirping wastegates, delivers more than enough power to be dancing in the rain with a few fast-paced toe jumps in between. That was the point where my co-driver Jan Fatthauer suddenly went white as a sheet.

Gerald Czajka
So the weather gods didn't smile on us. But even in the rain the GT9 Vmax was mightily impressive. This monster’s technical specs alone put to shame everything I've ever experienced. On the Zandvoort track, the über-911 had to fight it out mainly with the elements and physics – 1400PS and 20-inch ZR tires on the rear-driven wheels make for a damn early start to the water ski season. But the supersports car has proven its potential nevertheless. That it works almost boringly well for a car of this caliber is another bonus.