Walter Röhrl and Porsche Junior on the Nürburgring 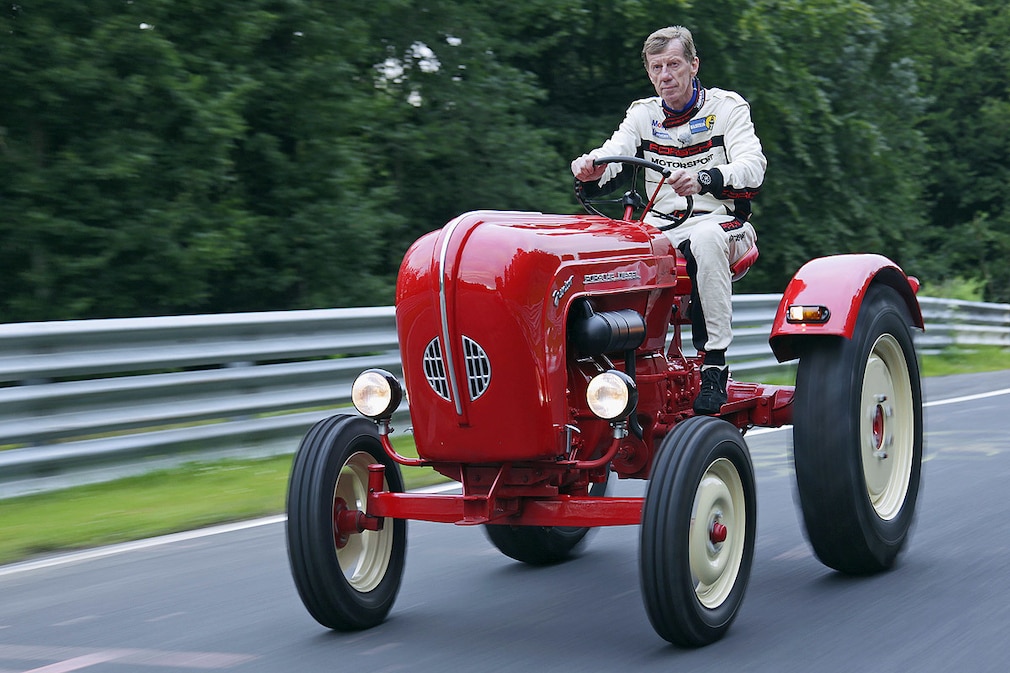 30.10.2014 —
Rally legend Walter Röhrl and Porsche are always good for a record on the Nürburgring. If it wasn‘t for Junior – a vehicle that was restored recently.
This man can't be fazed by anything. It's his job. If you break records on narrow, snowed-in forest paths at motorway speeds in the middle of the night, you can take a lot. When the little red tractor comes around the corner, however, double rally world champion Walter Röhrl does look a little shocked. "That's what I'm supposed to... No, you can't be serious. Are you?" he asks, horrified. I nod. Yes, we mean it. And he did promise. I want to go for a lap on the Nürburgring with Röhrl. He is to give his OK for the Porsche Junior in an acceptance drive. The vehicle was restored by the "Berliner Werkstätten für Behinderte". Then, the tractor was auctioned for a good cause by AUTO BILD.

Less than 40 minutes round The Ring – on a bike

I have not told Röhrl in advance that this will be his longest lap in the Green Hell. He could have known, though. We made the appointment by phone a few weeks before. "Let‘s start in the evening, then we'll not be in anyone's way," I tell him. Röhrl corrected me at once: "Then no one will be in our way, you mean." No, I didn't. But then I thought: He'll see soon enough. The Porsche Junior can do nearly 13 miles per hour. At full throttle, it takes about one hour to get around once the legendary racing course. Röhrl estimates the same before starting the drive. "I've never taken that long before. Even on a racing bike I can do that lap in less than 40 minutes," says the 65-years old. He's humble enough not to tell us that this speed would likely put him into the first third of the Tour de France. After all, 300 metres of altitude difference, a slope of up to eleven percent in the Fuchsröhre” and an inclination of up to 17 percent up to the Hohe Acht must be covered.This is a Herculean task for Junior as well. So let's get to it before night falls. Röhrl gets on nimbly. He hands the helmet he brought along to our photographer Sven: "I don't put it on for anything above eight minutes." Then, the world champion pulls an unobtrusive black button at the left of the fiery red sheet-metal dashboard. With an asthmatic cough, the single-piston engine takes up its work: Splutter-splutter-splutter-splutter-splutter, Röhrl needs no instructions. He drives a Junior as well – to dispose of garden waste. He adjusts the idling mixture, steps on the clutch. First gear. Full throttle. Go. Well, nearly so. "Junior picks up speed in fits and starts" would fit much better. The barrier to the tourist entrance of the Nordschleife opens slowly – but fast enough for us. Off we go onto the start-finish line. Second gear. We're going at six mph. The engine contentedly mutters under its breath. Third gear. Junior takes a leap down Hatzenbach. Top speed, twelve mph. The engine and the coarse tyres fight for who is the loudest.

Röhrl sports a satisfied smirk. Here, far away from all obligations of his daily life as a Porsche representative, he is right at home. "I didn't even want to become a race driver," the professional skiing coach says. On the way to the Alps, his friend and later co-driver Herbert Marecek noticed how fast he was driving. Marecek paid for the first start at the Bavaria Rally 1968 in a Fiat 850 – and Röhrl wondered on the first section already why the other drivers were going so slowly. He never thought that he might be that much more talented. At the Schwedenkreuz, where racing cars otherwise are in danger of taking off, we take the peak in stoic calm. Here, in the middle of the green forests of the Eiffel, I can see how Röhrl's mind really works as his passenger. In spite of the low speed, he takes the ideal line. First to the left. Then let the route carry you to the right without steering. A portrait for his 60th birthday, five years ago, said that his obsession had reduced a bit after his stepping down in 1987. Forget it!

No Porsche can bend this man

This man always gives 100 percent. Röhrl took the profession of the rally driver to a new level. Finnish superstars going to training with a whiskey bottle in the door deposit space was unthinkable for the man from Regensburg. Röhrl doesn't drink, Röhrl doesn't smoke. He is top fit and meticulous. No matter if it is about the fine tuning of a new Porsche or one of the many vintage car rallys he participates in today. When others used to spend the evenings in bars, back then, Röhrl sometimes lay in his hotel bed, going through the next day's races in his mind. That's his nature. He's a man from a simple background who has made his way to the very top with talent and diligence. He wins the rally world championship in 1980 and 1982 and is known as well as Michael Schumacher around the world in the 1990s. Röhrl has always remained himself. He will not be fit into any mould. He speaks his mind. That isn‘t always easy for the Porsche PR department. They like to set him loose onto journalists in vehicle presentations. He openly advised against the Tiptronic in the old model eleven. "It's no good. It switches much too slowly," he said publicly.There's no reason for complaint for him here and now. Junior remains calm as we go diving down the Fuchsröhre at nearly 18 mph. Decelerating slightly in the valley, we let ourselves be carried to the left. Up we go the next hill! Röhrl praises the restoration work of the Berliner Behindertenwerkstatt. "The brake is much better than in my own Junior. This one is set perfectly." It's not like we actually need it. Taking the foot from the throttle is quite enough to take even the narrowest bends comfortably. In the Karussell, Röhrl grins – he says he had never taken a Porsche through this part of the track at full throttle before. Then up we go the Schwalbenschwanz and across the Galgenkopf to the "Döttinger Höhe". We have reached the finish. Out towards the right. The flag drops. Röhrl glances at the clock at once. "Well?" I ask. One hour, five minutes and 36 seconds. It was Röhrl's longest lap, there is no question about that. Is he satisfied? He thinks about it and recaps the course. I got it. Someone like him will never be satisfied. Least of all with his own performance. How about another try? Just joking, Walter. Don't let me faze you.